How Do You Tell Someone That Has Just Gone Through So Much Their Baby Is Dying? 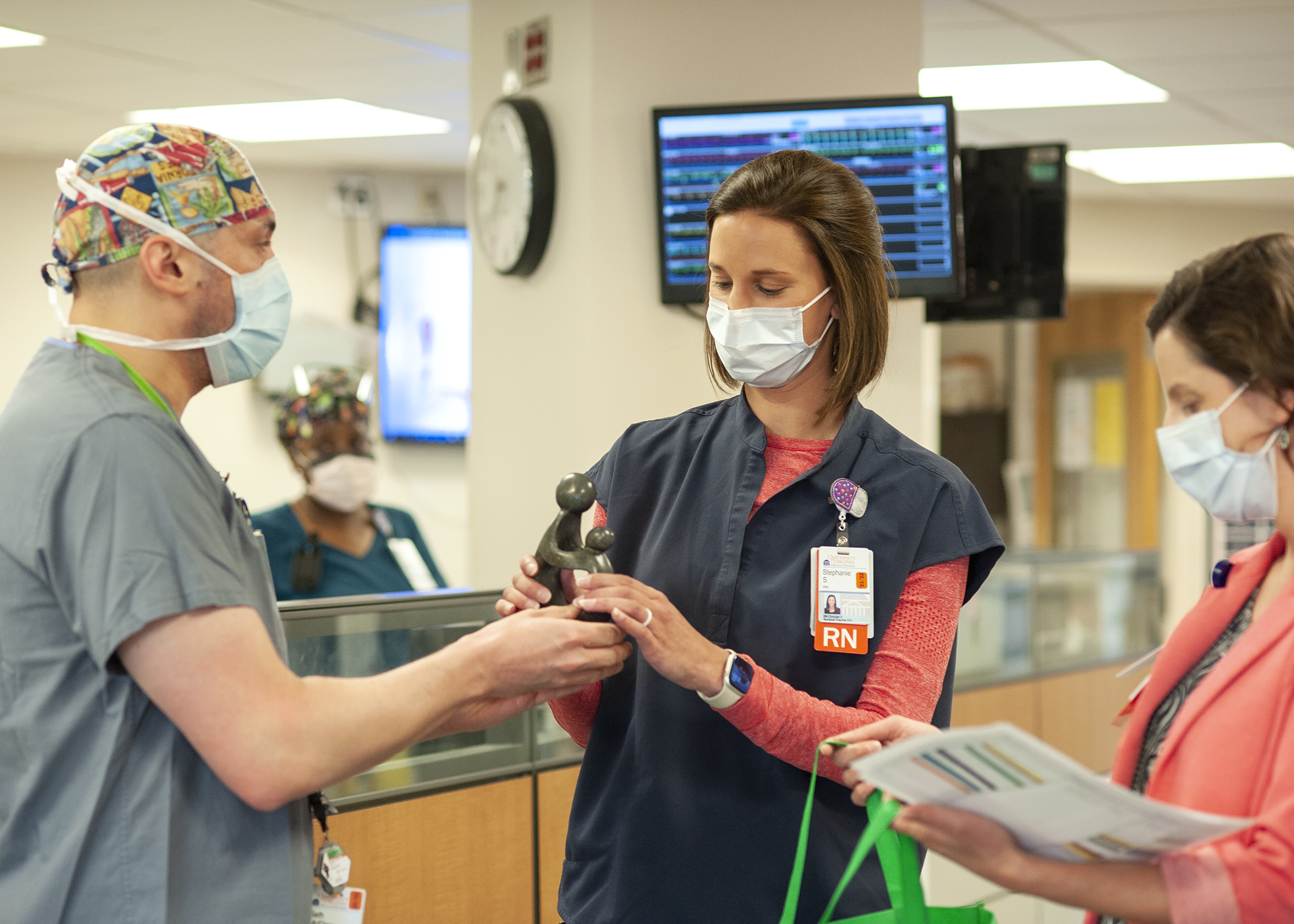 On one hand, nurses in the Surgical Trauma Intensive Care Unit (STICU) have seen it all. On the other hand, they continually witness new, once-in-a-lifetime tragedies. On a recent shift, Stephanie Strauss, RN, STICU, handled an uncommon and heartbreaking situation with a mom and premature baby so eloquently that her colleague nominated her for a DAISY Award. Stephanie received the award at a surprise ceremony on her unit with her colleagues and Nursing leadership. Read the full nomination below.

“It is not uncommon for a STICU nurse to face emotional challenges frequently: Many of our patients started their day off like any other and then something drastic happened that changed their life forever.  We are ‘used to’ caring for patients that have a new ostomy and find themselves now struggling with body image and this new aspect of their life; we are ‘used to’ caring for the middle-aged woman driving home from church when a gust of wind blew a tree onto her car causing injuries that resulted in paralysis; we are ‘used to’ the victim of assault that woke up from their gunshot wound to the head only to be informed their spouse did it. What we are not ‘used to’ is telling a young mother the baby she just delivered prematurely is dying, and we want to take them to be with the baby while they take their last breath.  However, that is the scenario Stephanie was presented with the latter half of one of her recent shifts.

“The STICU charge RN received notification a mother had given birth prematurely and had a large amount of blood loss and required emergent intubation. The patient came to STICU, where Stephanie, along with her new graduate orientee, was her nurse. Prompt assessment and care by the STICU team allowed mom to be extubated shortly after arrival. Not long after extubation, a phone call came from the NICU [Newborn Intensive Care Unit] charge RN that the baby was not doing well and would not live much longer. This is where anything ordinary about Stephanie's day ended.

“How do you tell someone that has just gone through so much their baby is dying? I do not know what Stephanie said to this mom when she re-entered the room after learning the news of the baby — that is news no one wants to give to anyone — however, time was not something they had a lot of. Stephanie hooked mom up to travel equipment, unplugged her IV pumps and bed, and to the NICU they went. Stephanie stood back and continued to monitor mom from afar while giving her the opportunity to hold her daughter as her short life came to an end. After, Stephanie was able to coordinate with the STICU and NICU teams to have mom, dad, and baby come back to the STICU where they could spend private time alone as a family before they hugged and kissed their little girl for the last time.

“There are many wonderful nurses that have encounters like this often, and I'm sure this is not a situation one ever gets used to. These nurses deserve the greatest respect for the emotional toll that comes from these moments and their ability to stay strong in such challenging times. I am nominating Stephanie for the DAISY Award for the compassionate care she gave to this family in one of these situations. Though I know this was not a typical day for Stephanie and is not something she is used to doing, you would never have known that day. Stephanie cared for this mom and did what she could do to ensure this mom did not miss out on meeting her child. Stephanie was extraordinary — a wonderful example to us all of the impact we can have on our patients and a wonderful example and role model to a new graduate nurse that will likely remember this experience throughout their nursing career.

“Stephanie, thank you for being the kind, compassionate person you are. We are very lucky to have you as a member of our STICU team.”